I was looking forward to this recording which was to include some pieces played with the church organ. The original plan was to set up in the afternoon alongside the band’s rehearsal; however, the organist was not going to be available, and there was no dress rehearsal, so I went along to a band night in Hesketh. To get a feel of what was required. 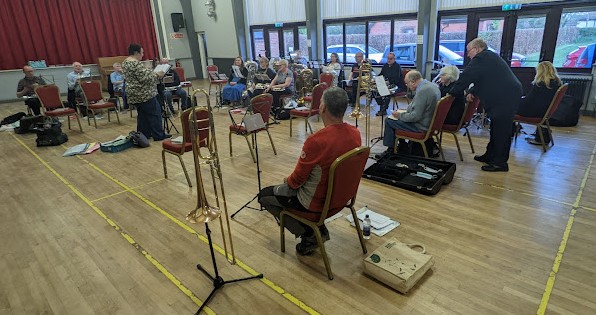 However, when the band was set up in the church, it was a bit of a squeeze, and as the numbers swelled microphone placement plan fell apart, and the front stereo pair got pushed back a bit too far for clarity of the soloists. As more of the band arrived, the camera had to be moved around and unfortunately settled on a soft bit of floor, which rocked with the tapping foot beats of the audience and unfortunately got pushed in the second half by an audience member brushing past :-(.

However, I was pleased with the sound, apart from the soloists being a little low in the mix. Perhaps this is a rehearsal for when the organist is available. If I am allowed to record, there will be an additional stereo pair on the organ, a soloist mic, and the front stereo mic will be flown higher and further forward. The camera will be relocated to the organ loft for a wide overview with a second camera with a tighter lens for the solos. We will also have to put a camera in the organist’s box in the center of the alter.

Lighting was also a struggle as the church seems to be lit with tungsten-simulated flouresent bulbs. So Next time.  I will be bringing in a couple of big floods to balance the lighting.

Nonetheless, I think this recording offers a pleasing perspective of the lovely sound of the Hesketh Silver Band